Water is a very simple molecule (two hydrogen atoms combined with one oxygen atom), but that simple combination allows the emergence of exceptional properties that have made water the most important solvent on earth and an essential support to the development of life.

The dipole moment of the water molecule is shown in the drawing below:

This dipole moment causes water molecules to be attracted to each other (the slightly positive hydrogen side being attracted to the slightly negative oxygen side) and to other polar molecules. This attraction is named hydrogen bonding, and explains several of the water properties.

The water molecule dipole and the resulting hydrogen bonding explains several of the water properties such as water high melting and boiling point temperatures that are due to the energy required to break the hydrogen bonding, the fact that ice has a lower density than liquid water, the high surface tension, heat of vaporization and viscosity of water and, to some extent, the ability of water to dissolve many substances.

Water is an excellent solvent for salts because these are made of negatively and positively charged ions that will be surrounded by the dipolar water molecules.

Water is also a good solvent for neutral organic molecules and establishes hydrogen bonding with many molecules involved in the life processes such as glucose, proteins, nucleic acids….

Because water is an excellent solvent, ultrapure water is easily contaminated.

In a classical experience, ultrapure water with a resistivity of 18.2 MΩ•cm @ 25°C was left in a beaker and the evolution of its resistivity measured over time. The results are shown in FIG4 and demonstrate the rapid contamination of water by carbon dioxide from the air, leading to the production of HCO3- in the water and the resulting decrease of resistivity from 18.2 MΩ•cm @ 25°C to 4 MΩ•cm @ 25°C in about one hour. 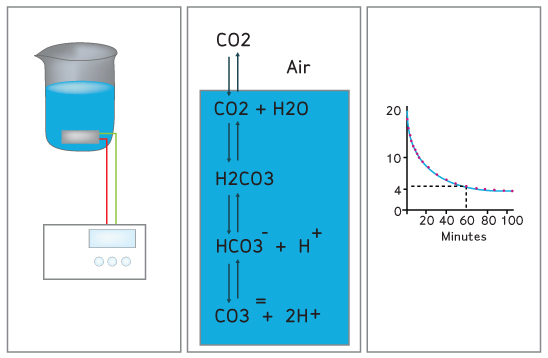 What is true for CO2 is also true for other chemical substances that may be present in the air of a laboratory such as acid fumes (from nitric acid or chlorhydric acid) and volatile solvents (such as toluene, acetone or tetrahydrofuran).

Ultrapure water is also easily contaminated by materials extracted from containers such as sodium and silica from glass, plasticizers and ions from polymeric materials (for instance, phthalate esters from PVC pipes, fluoride from PTFE pipes) and metallic ions from metallic containers.

This is the reason why, in order to minimize the risks of contamination and the experimental variability that can be caused by these contaminants, ultrapure water should be produced just before usage and used at once for glassware final rinsing or the preparation of solutions.

For many physico-chemical parameters, water has outstanding values; many of these values can be explained by the hydrogen bonds that link water molecules together.

Some key parameters of high purity water are listed below:

The water molecule has another interesting characteristic: its ability to dissociate itself. This is expressed in the equation shown below:

With Kw as the equilibrium constant of the water dissociation equilibrated reaction. Due to the law of masses action: [ H+] [ OH-] = Kw [ H2O]

As the concentration of water is a constant for a given temperature is a constant, the equation can be simplified as follows: [ H+] [ OH-] = K

With K as the ionization constant of water, expressed in (moles/L)². The value of K changes with temperature.

The value of pH (from the French “potential hydrogene”) is defined as the logarithm base 10 of the proton concentration: pH = – log [ H+]

The fact that the pH of ultrapure water with resistivity equal to 18.2 MΩ•cm @ 25°C can only be equal to 7.0 (actually, it is equal to 6.998) has been demonstrated in an article published in American Laboratory News June/July 2006 : High-Purity Water and pH by Estelle Riche, Aude Carrie, Nicolas Andin and Stephane Mabic

In this article, it is demonstrated that the pH of ultrapure water with resistivity equal to 18.18 MΩ•cm @ 25°C is equal to 6.998 (lets say 7.0 as a quick approximation). Any attempt to change that pH value, for instance the introduction of a strong acid such as HCl or a strong base such as NaOH, while decreasing or increasing the pH, will also result in a decrease of resistivity because additional ions are introduced in the water.

A resistivity value of resistivity equal to 18.18 MΩ•cm @ 25°C is therefore a synonym of a pH value equal to 6.998 at 25°C and ultrapure water cannot have another pH value.

Earth is sometimes named the “Blue Planet” due to the large amount of water present on its surface. Oceans and seas cover more than 70% of the earth surface.

The volume of water on earth is evaluated in the table below: